Typically, the perfect projector comes at a heft cost. It’s not always easy balancing great quality with affordable price. Sometimes, however, you find a projector that can do just about everything without breaking the bank. With an attractive price tag (comparable to a premium television with a smaller screen) and a compact design, the LG HU70LAB is a great 4K projector that offers a lot of surprising features that really elevate your home theater experience.

Who is the LG HU70LAB CineBeam for?

Looking to upgrade your home theater? Want crisp, vivid colors without working about halo effects or – more importantly – problems with your image? This projector is going to appeal to you.

Established in 1958, LG Electronics has a long history of manufacturing home appliances, radios, and televisions. In the new century, they have begun developing digital technologies on a global scale, including launching their line of home theater projectors. That’s where the LG HU70LAB comes in.

Tired of the inconvenience of plugging in a streaming box to your projector and losing precious connectors in the back that you could be using for blu-ray or even your PS4? With the built-in webOS and impressive remote, this projector is made for a relaxed, stressful viewing experience for your favorite movies.

As the slight deviation in the name might suggest, the LG HU70LAB projector is the same model as the LG HU70LA with one difference – the chassis on this model is black while the other is white. As such, we’re going to be talking about them both in this review. 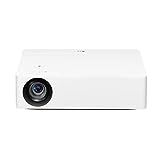 Let’s take a look at what the LG HU70LAB 4K CineBeam has to offer. There’s a lot to cover here, so buckle in and enjoy!

The connector panel has a wide variety of options, which is a nice change from some of the smaller budget projectors we’ve reviewed in the past. Given the price, this is to be expected. It doesn’t hurt that had plenty of additional features that make these connections even more versatile long term. Here’s what’s included on the connection panel:

In addition to the specific projector features, there are several other things we think are worth a quick note, though we’ll cover several in further detail later in this review.

We like the way this projector looks. It’s a compact projector that doesn’t take up a lot of space in your home. Its minimalistic design is reflected even in the buttons on the projector itself. The included remote does most of the heavy lifting (including focusing!) so you won’t have to worry after you’ve mounted it to your ceiling.

One great advantage of this projector is its use of 4 Channel LED with Wheel-less technology. The HU70LAB uses RGB separate primate colors, giving it a bright, vivid picture with no color loss compared to traditional projectors that use a color wheel to reflect colors from one color light.

It has great color accuracy and significantly less rainbow effect on the colors! Additionally, using LED technology means you don’t have to wait for a bulb to warm up before you get started.

Wow! This is certainly a great feature. LG’s webOS is probably the best operating system for projectors out there, especially when it comes to streaming media directly from your device. You can directly download streaming apps to the projector, eliminating the need to purchase any other streaming devices like a Roku or Amazon Fire Stick.

You can stream 4k movies over wi-fi without issue. Additionally, you can also use wi-fi to mirror a device screen or play videos directly from your phone, tablet, or another device.

This makes your projector feel like a smart TV more than any other projector we’ve reviewed.

While we will talk more about the remote below, it’s worth noting that the webOS comes with Google Assistant. That’s right, the remote has a built-in microphone that you can use to launch apps, play movies, and far more!

Time to break this projector down a little further. Let’s dive into the good and the bad so you can see where the LG HU70LAB CineBeam stands when it comes to quality, durability, and price point.

Let’s jump right into the best things this projector has to offer!

If you know us, you know we can be pretty picky when it comes to remote functionality. Fortunately, the LG remote (for all their 4K projectors) sets a pretty high standard for others moving forward. It has an air mouse that actually works! There’s nothing more frustrating than trying to type on a trackpad that just isn’t as responsive as it needs to be. There are buttons to launch individual apps immediately, the ability to control the focus directly from your couch, and a lot more.

Even better? It’s backlit! What more can you ask for?

The LG HU70LAB comes with built-in wi-fi capabilities (a must when factoring in the presence of streaming apps) and Bluetooth audio output. This is such an advantage when it comes to boosting the projector’s functionality and versatility for streaming.

While it’s no mini-projector, the CineBeam has an advantage over many of the other cinephile projectors in that it’s relatively lightweight. Weighing in at just over seven pounds, it’s more portable than many others in the same price range. (Though we suspect you’ll want to use the ceiling mount features for a permanent installation).

While LED projectors are notorious for not being as bright as traditional power sources, the LG HU70LAB was impressive! It provided bright, amazing color that doesn’t need much adjustment in a dark room. The image quality is certainly above many other models.

The LG HU70LAB projector retails at $1799, but we have seen it going for under $1600 a few times for either color chassis when on sale.

LG hardly have any 4K projectors that go for less than $2000, which makes the HU70LAB a steal for the features it has to offer. It’s no more pricey than a television of the same image quality and image size but still gives you all the same smart TV features.

To be fair, this category doesn’t have many items. We liked a lot of things about this projector and we think you will too. However, in the effort of fairness, let’s talk about the things we didn’t like about this model.

As we said, LED projectors aren’t as bright when compared to others. This does mean that you aren’t going to get the best contrast when faced with a lot of ambient light. If you plan on watching action movies in a brightly lit room in the middle of the day, this isn’t going to work for you.

The blacks just aren’t as black without the right lighting. The black levels could use work. Direct sunlight is not the LG HU70LAB’s friend, unfortunately.

To be completely honest, the 3.0-watt speakers are lackluster at best. For the price point of this projector, you would expect sound comparable to television. That’s just not the case. They lack bass or reverb, making the sound quality flat from the get-go. You’ll want to invest in a soundbar at the very least to make up for it.

This is a little disappointing, to be honest. But ultimately, it’s a small issue compared to the whole package.

While the image quality is great for gaming, the input lag is not. The projector reportedly has about a 43ms lag on gaming mode with a 53ms lag in other modes. This can make a difference when playing online or looking for a projector to handle competitive gaming.

Alternatives to the LG HU70LAB

Not convinced just yet? That’s perfectly normal! Let’s look at some other options you might like just as much – if not better – than this model.

If you want to stick with an LG projector but want to check out a different model, why not look at the LG HU85LA 4K UST Laser Projector? This 4K Ultra Short Throw laser projector has a lot of great features, but it will cost you quite a bit more than the LG HU70LAB. The laser light source gives you the same faster boot time as the LED but with a much brighter output.

It has everything the HU70LAB has to offer and so much more! This projector can throw a beautiful, crisp 120” image at little more than 7 inches away. It offers better contrast, making it perfect for ambient rooms. The color accuracy and black levels are close to perfect.

The internal 5-watt speakers give some great sound quality. Additionally, it comes with the same LG webOS features – like streaming apps and the Google Assistant – and that great remote. Unfortunately, this projector will set you back somewhere around $5,000 new. So it’s not in everyone’s budget.

Check out the LG HU85LA

You can’t go wrong with an Optoma projector. This 4K UHD gives you a bright 3,000 lumens and an RGBRGB color wheel for a fantastic, brilliant image. It provides an advantage if the main emphasis is on picture quality. The CinemaX P2 also uses lamp dimming to improve those black levels. It also boasts no rainbow effect and is more versatile in a variety of settings.

It typically retails for over $3,000 online. This puts it at somewhat more expensive than the HU70LAB but without all the bells and whistles.

When it comes to LED projectors, the LG HU70LAB is one of the best we’ve seen. Priced at under $2,000 and packed with great features, it’s a clear winner as an alternative to a 4K Smart TV, even when compared to LG models in the same price range.

The LED light gives you much longer staying power (with an estimated 30,000 hours of lamp light) and from what we’ve seen, this is a durable little projector that will serve you for a very long time.

As noted above, the only thing we wouldn’t recommend this model for is competitive gaming. You just won’t get the lightning fast reaction time you need to compete with proper gamers. For casual gamers, however, it shouldn’t be the same issue.

Overall, we really like this projector for what it offers. If you want a 4K experience and an LED projector, we can’t think of many models better than the LG HU70LAB.