The WEMAX Vogue Pro is meant to be compact, easy to use, and simple to set up. Just plug it into a power outlet, place it on any flat surface like a table, turn it on, and you’re all set. This standard LED projector will provide you with a realistic viewing experience with some smart capabilities during the day and at night.

The WEMAX Vogue Pro comes with its own WEMAX OS that provides an Android base, but its own, tailored to its interface. The only downside with such technology is that WEMAX isn’t as fleshed out as Android TV and there’s no Google PlayStore.

However, this projector isn’t meant for all. All its features are tailored towards cinema enthusiasts who enjoy watching movies all day long, or outside with friends. And in this review, we’ll cover everything from design features to usability to show you why.

But if you’re looking for a quick rundown of what makes this project superior over other models here are some noteworthy points: superior brightness levels (1,600 ANSI lumens) with no fluctuations in color quality; ample connectivity options (HDMI port is especially satisfying); small size; and lightweight. 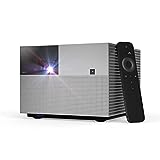 Features of the WEMAX Vogue Pro

You’ll find the projector itself, its power cord, remote control, a cleaning cloth, and a user manual when you open the entire package. The power cable is 3-pronged to deliver the 220W Vogue Pro is rated for. The remote control has all the usual navigation elements and the brand’s unique launch button. It does utilize Bluetooth to connect.

It has a simple look right out of the box

The WeMac Vogue Pro really looks clean. It has a rather cuboidal shape (200 x 200 x 148 mm in size). And with its sharp, straight edges and glossy gray finish, you get a simple, sort of modern and professional look that goes well with your room or cinema.

The power button is centered at the top. Its prominent position makes it so that you can easily press it. It will light up with a gentle white. In the front is the lens that is placed behind a protective glass plane.

I guess this is where you’ll find the cleaning cloth necessary if the dust covers the glass. Otherwise, this is unique since most brands tend to avoid this because they fear dirt may get trapped inside the housing.

Also, you have the speaker grille that houses two 10W speakers. Both sides have air vents that cover all through. The speakers should be decent but not as clean or clear as you could have hoped for. WEMAX says you should expect a silent operation. And judging from their rated fan noise which is less than 28dBA in movie mode, the WEMAX Pro will most likely be rather quiet when you’re using it.

In the rear are the I/O and the power plug. The I/O consists of a pair of HDMI 2.1, of which one is ARC capable. Next to those are two USB 2.0 connectors, a headphone jack, digital output, and an Ethernet port. Non-wired connectivity for wireless networks and Bluetooth round things off.

The square bottom is fitted with a four rubber that helps the Vogue Pro avoid slipping around while it’s placed on a surface. You also have a mounting spot.

Lightweight, easy to carry around

The WEMAX Vogue Pro weighs 3.5kg. This should be easy to carry around if you’re going to use it in a portable setup. It also isn’t too heavy for a permanent installation like a wall mount. You can just set it up on the floor or table and make sure that the bottom is flat and level when you do so.

Vogue Pro has an automatic setup

The initial setup is straightforward as we’ve seen. Just place it on a flat surface or mount it on a tripod stand, plug it into a power source, and right away Vogue will project a clear image right on your screen.

The intelligent obstacle avoidance allows Vogue Pro to recognize any obstacles within its projection range and automatically adjust pictures accordingly on your screen.

On the other hand, intelligent screen alignment helps you align the projector’s projection plane with your screen which is useful if you want a centered image.

We mentioned that WEMAX has its own operating system. Truth be told, it isn’t as sophisticated as Android TV which allows you to transfer user and network details. However, it is rich in its own way.

With the WEMAX OS, you must first connect your remote and manually enter some information to set up the device fully. You will receive a software update which you will install when you’re online.

You can easily navigate through the user interface with some quick access buttons when you activate the WEMAX launcher by pressing the dedicated button on the remote. The user manual will provide more information about the OS version, autofocus, keystone, and ability to provide feedback.

The WEMAX OS will give you no access to Google PlayStore. However, it comes with three preinstalled apps Aptoide TV, GetApps app store, and Firefox from which you can choose to install media streaming apps.

For example, you can install Netflix and Youtube from Aptoide TV. Although, this will cause Aptoide TV to crash and Get Apps to block the user from using an unsupported device. Firefox becomes your web browser.

Note: Interestingly enough, before going through with the software update, there was a Chinese language app as well.

Streaming from your mobile or tablet PC is possible and easy. Just connect the Vogue Pro to a network’s Wi-Fi and cast your favorite videos. It could be media files stored in your smartphone but can also be video files saved on a cloud server.

Screen mirroring should not have any problems. If you have an HDMI-capable device attached to the source, it will try to mirror onto this display as well as Vogue Pro itself.

Broadcast and Airplay content will also work fine, assuming you have a compatible Apple TV or iPad air in your vicinity. Last but not least, if you want to download videos from the internet directly, you can do that too.

The images projected during the day are very clear and the colors are not washed out by the sun. The light is balanced and well-tempered so you can enjoy your multimedia without straining your eyes. The contrast ratio is also balanced probably because of the 4-Channel LED as the light and image source.

If you’re watching movies that have a lot of black areas, these areas tend to lose their depth and are a bit grayish. For images that look sharp and clearer, you’ll want to control the amount of light entering your room.

At night, the color accuracy is high and the 4-channel LED is able to project very better black levels over LED-lit. One thing you’ll notice is off is that the contrast ratio of the projected pictures in WEMAX Vogue Pro is too bright.

The brighter areas will become too bright; the exact thing you see during the daytime, only that it is with the black areas. You can tweak some contrast and brightness settings to tone things down for more balance and get a nice pop to your pictures on the screen.

Vogue Pro can project both small and big images

WEMAX Vogue Pro is able to project a large image about 200 inches wide at the maximum and more than 120 inches which are up to 60 inches nearer to your screen and enjoy bigger images.

It may sound like too much, but we have seen higher resolution for contemporary projectors that are way above this one. We also found that a good screen size is around 100-115 inches (1:1:5 ratio) to achieve excellent quality from WEMAX Vogue Pro.

Speakers are not particularly loud especially considering that it is intended to be placed on the floor in front of your main seating area. But I still expect this device to deliver some decent sound quality since the speakers are surely capable enough even if they’re not so clear or clean.

For perfect sounds that will make you dance to the tunes of your music, you connect WEMAX Vogue Pro to dedicated Bluetooth speakers and fill your room with sound. You will not miss a word when you watch that movie.

Long lamp life – the WEMAX Vogue Pro has a LED light source with a lifespan of 25, 000hours. This should be enough to last you for at least 8 years maximum if you use Vogue Pro sparingly.

WEMAX Vogue Pro has many features for home entertainment – wireless streaming, screen mirroring, and video downloading. Wireless media streaming is also made possible by useful apps embedded in WEMAX OS such as Aptoid TV, and Get Apps. Both allow you to install Netflix and YouTube.

Silent operation – unlike most projectors that have fans, the Vogue Pro is really quiet; with less than 28dBA. It will not disrupt your movie, TV show, or music experience with noise.

No access to Google PlayStore – which may limit you to a number of streaming apps. Anyways, it shouldn’t discourage you since you can get your hands on popular streaming apps like Netflix.

No built-in battery – this means you need to connect to a power supply to project something. Similarly, it can be limiting if you wanted to enjoy a movie outside.

You can’t play games – specifically, competitive or fast-paced games. You’ll notice some lags while turning this projector on. But, I believe it can play casual games albeit with some lag.

Expensive – given its features and the fact that it’s limiting in some aspects as gaming, and no battery, I think it fetches a high price at $1,200.

Here are some alternatives you can go for if you are not satisfied with the features the WEMAX Vogue Pro has to offer you.

Alternatives of the WEMAX Vogue Pro

If you want to retain all the interesting features in Vogue Pro, but at a cheaper price, you can go for WEMAX Dice. It goes for around $700 only. You will have a built in battery that can last up to 3 hours screen time. The only thing you’ll lose when you buy Dice is the brightness Vogue Pro offers. With WEMAX Dice, you’re limited to completely dark rooms.

Another alternative is Optoma UHD38. This is an ultra low input lag for gaming. At $250 more, you will get more brightness at 4000 ANSI lumens, much less input lag at 4K display (16ms), and more advanced features. UHD38 improves on all fronts in Vogue Pro.

What makes WEMAX Vogue Pro particularly interesting is the ability to stream during the day. I think it makes home entertainment just a bit more enjoyable. One thing you’re sure of with WEMAX Vogue Pro is it does what it is intended to do and that it project clear images on your screen.

With some tweaking of settings, it will deliver an excellent picture. However, if they could deliver a good gaming experience and add on some improvements to the existing features, I think the Vogue Pro is going to be another hit on the market.