For years, the main factor that has been keeping quality 4K resolution projectors out of the hands of all consumers has been the price. While cutting-edge technology will always carry a hefty price tag, the fact of the matter is that 4K is almost three years only at this point. Yes, it is still the highest resolution that is available to most consumers, but still – prices will have to decrease eventually, right?

This brings up the question: What difference do these different colour wheels make? In short, not much, as these two colour wheels present a small trade-off when it comes to the overall colour brightness seen by each unit. Other small differences between the two models exist in areas such as lumens (rated 2200 lumens for the ViewSonic PX727-4K versus 3500 lumens from the ViewSonic PX747-4K ), but only a well-trained eye will be able to really spot these minute changes. Since the difference between these two models is minimal, we will solely focus on the ViewSonic PX747-4K throughout this review.

However, readers should note that many of the benefits (and critiques) associated with the ViewSonic PX747-4K can be applied to the ViewSonic PX727-4K. So, if you want to avoid researching another projector option, feel free to consider these two models as projector “cousins” from the ViewSonic line of products. Everything discussed within this review that applies to one model applies to the other – including the price.

As the ViewSonic PX747-4K is a standard throw projector intended for use cases where there is quite a bit of distance between where the projector is placed and the screen, this unit can only be put to real use in larger settings. This limits the application of the ViewSonic PX747-4K to large home theatres, spacious offices or boardrooms, and other such environments, such as lecture halls.

With such realities in mind, the ViewSonic PX747-4K is really for whoever has enough space to put it to good use. Representing one of the most affordable 4K projector options on the market today, the good outweighs the bad for those who can accommodate a standard throw-style projector such as the PX747-4K.

However, we urge our readers to consider the fact that this projector does not output true 4K resolutions. Instead, it utilizes a technology called XPR, which basically uses lots of tiny mirrors to improve an image’s apparent resolution. To the untrained eye, the resolution output by the ViewSonic PX747-4K is the same as any high-end projector. On the other hand, if you have grown accustomed to true 4K resolution, there may be some minor complaints to be had. Generally, the ViewSonic PX747-4K is a fantastic option for those who have enough space, are looking to purchase an extremely affordable unit, and are willing to sacrifice true 4K resolution for the next best thing.

If you think that the PX747-4K isn’t the right projector for you, no worries! We suggest you either check out some of our suggestion for an alternative to the ViewSonic PX747-4K (see below) or check out our list of the best 4K projectors available in the marketplace today. 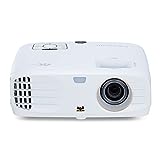 What Unique Features Does The ViewSonic PX747-4K Offer?

ViewSonic is known for making extremely affordable and functional projectors, but they do not have the best reputation when it comes to including cutting-edge features within their products. This makes sense, as many products like the ViewSonic PX747-4K are intended to be budget projectors that help these great devices to become more accessible to everyone, regardless of their budget.

With this being said, the features that are included with most ViewSonic projectors are often more than enough to satisfy the needs of customers. A powerful projector doesn’t have to offer revolutionary features, and in this sense, the ViewSonic PX747-4K perfectly fits the bill. While not exactly unique, some of the most notable features found with this projector include:

Since rising to the top of the affordable projector market, ViewSonic has done a great job of offering strong products by getting the basics right. While none of the features highlighted above are winning any awards for innovation or inventiveness, such details can make-or-break a projector at this price point. Thankfully, we are happy to report that by and large, the ViewSonic PX747-4K is a very reasonable projector for its price. Yet, like any budget projector, it has some quirks and flaws that are worth noting. To give our readers a full understanding of what the ViewSonic PX747-4K has to offer, we will be focusing the following section on some of the pros and cons provided by this projector.

What Are Some Benefits And Downsides For The ViewSonic PX747-4K Projector?

When shopping for a budget product, customers typically understand that some tradeoffs must be made, whether in the quality of the product or its included features, in order to ensure a rock-bottom price. Shopping for an affordable projector is no different, with each device in the $1,000 price range having its own unique set of flaws and downsides associated with it. This isn’t to say that affordable projectors must present customers with a lose-lose scenario.

Every once in a while a product like the ViewSonic PX747-4K, which manages to balance price and quality effectively, is released. In order to give our readers a complete picture of what the ViewSonic PX747-4K has to offer, let’s first cover some of the most significant benefits provided by this projector:

These benefits help to separate the ViewSonic PX747-4K from its other budget-friendly counterparts. If you’ve got the room to accommodate this standard throw projector, then it could be a great addition to your current home theatre, board room, or lecture hall-sized setup. Yet, it is essential for you to understand both the good and the bad associated with the ViewSonic PX747-4K. With this in mind, let’s look at some of the downsides that this projector presents to users:

What Is A Good Alternative To The ViewSonic PX747-4K?

For starters, those who are still hoping for a budget projector but haven’t been able to fall in love with the ViewSonic PX747-4K may want to give the ViewSonic PX727-4K a passing glance. While it offers many of the same specs, it is just different enough to warrant a second look for those who are serious about keeping to a budget of approximately $1,000.

If you are wanting to look at projectors from another manufacturer, we suggest starting with the BenQ TK800 4K projector. This unit is another budget-friendly offering that showcases many of the benefits that affordable projectors can offer while avoiding many of the silly downsides associated with the ViewSonic PX747-4K model. Better yet, the BenQ TK800 4K projector offers 3D content capabilities, which is not provided with the ViewSonic PX747-4K.

Those shopping for a new projector should ensure that they are 100% satisfied with their selection before making a significant investment in such a product. With so many different projectors from dozens of manufacturers, we are confident that you will find the right option that aligns with your personal taste and budget. We encourage you to take your time, keep an open mind, and continue to search until you find the perfect projector for your needs.

The ViewSonic PX747-4K: A Mixed Bag Of An Affordable Projector

The ViewSonic PX747-4K is an excellent option for those who want to stick with a shoestring projector budget. However, the weird quirks and annoying omissions by the team at ViewSonic make us hesitate to suggest this product to anyone outside of that category. The price of near 4K and true 4K projectors is continuing to drop steadily, which means that great deals can be had on far more capable projectors if you are patient and do some research on what is out there.

Outside of the quirky nature of the ViewSonic PX747-4K, it is essential to consider the fact that this is a standard throw projector, which means you’re going to need a lot of space between the projector and its associated screen to get it to function as intended. This fact further narrows the category of consumers that will get the best use out of the ViewSonic PX747-4K significantly. Overall, it is a great budget projector for a very specific section of potential customers, but outside of that, it is not much to consider, especially when far better projectors can be had at a similar price when they go on sale.