If you crave brightness, color, and image detail on your screen, the LG HU810PW is your choice projector. It’s tough for any projector to beat it at that.

Reviewers love its remarkably lifelike and sharp image quality, which gets even brighter in a dark room, letting every bit of the picture impress the eyes. And what the LG HU810PW does right, it really does well. All the specifications are well-balanced, and it excels well in every category; from brightness, UltraHD 4K resolution, color settings, and its laser technology.

The only downside is how the HU810PW handles grayscale. The dark scenes look a little mediocre, although the greyish-black levels should not be a problem, except that it gets washed out in some scenes.

Nevertheless, the overall picture quality and resolution are commendable for cinema viewing. The color depth is equally impressive, giving the HU810PW clearer pictures with accurate colors that add a touch of realism to the overall image. With Game mode active, it measures an input lag of 47.9ms which most gamers will find mediocre for fast-paced gaming. 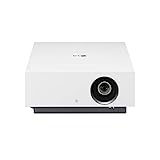 Features of the LG HU810PW

When LG says the HU810PW gives the “sharpest of images,” they mean it. It’s just that sharp. This projector can render finer details on the screen with appreciable depth, texture, and clarity. So, how do they achieve this?

Well, the LG HU810PW has lasers. Two of them. One blue and one red. And we all know how awesome laser technology is. The laser light is passed through a green phosphor to create all the light and the colors you see on your screen.

In fact, with dual lasers, the LG HU810PW can create realistic and brilliantly sharp images which accurately represent all colors, thanks to a wide color gamut; 97% of the DCI-P3. Meaning it offers much more depth in the image than most projectors can achieve on their own.Another benefit of lasers is that they last longer, compared to traditional UHP lamps. The laser light source in the 810PW is rated at 20, 000 hours, that is, 833 days and 8 hours assuming you run it 24/7.

It turns on and off far faster than most traditional UHP lamp-based projectors, and as a bonus, it has an ignorable low pitch to its fan noise. It is not silent. Compared to other small, cheaper, DLP-based projectors, it is quieter.

So, what other features does the LG HU810PW has up its sleeve for a brighter image?

LG HU810PW is designed for both bright and dark rooms. It is bright enough to be used in a well-lit room, but explosive colors and dark-level detail are best enjoyed in a dark room.

Moreover, the LG HU810PW has a unique Iris technology. You can adjust Iris mode, depending on the lighting condition of your room, to the maximum aperture for picture visibility and fidelity in bright rooms. Likewise, you can switch to Iris minimum aperture for optimal viewing in dark rooms.

4K UHD experience is predictably incredible with the LG HU810PW. It is especially so when watching movies at the cinema in a bright room with bright lights coming from the screen. You’ll be shocked at how it’s capable of displaying realistic images under such lighting conditions.

With 3,840 x 2,160 Ultra HD 4K resolution; which means more than 8 million pixels like the previous models, you won’t have to worry about pixelation, should you zoom out your images.

LG has also extensively assigned a color value for every single pixel, to enhance its accuracy and color fidelity. They’ve even optimized the settings on their laser to ensure color accuracy and its portrayal is accurate for every scene.

With HDR (High Dynamic Range) technology, you can experience the visual depth and vibrancy that enriched content delivers.

HDR content is brighter than HD content, maxing out at 2,600 lumens unlike 1,400 lumens as seen with HD content in the brightest picture mode. So, brightness is certainly not an issue with the LG HU810PW.

The only downside is the images are visibly blue/green in the brightest picture mode, which affects the overall image fidelity.

Note: LG HU810PW is both 4K and HDR. This combination, said many reviewers, is what gives the LG HU810PW its razor-sharp image and superior detail. The UHD resolution means each pixel can be as small as 1.07x the size of full HD, which improves the resolution of an image on a screen. This translates to a clearer, more detailed picture that’s meant for film viewing and gaming.

LG HU810PW is also, HDR Pro. This means it includes almost all HDR specifications. This includes;

Although the contrast in this projector is mediocre, with greyish, or rather washed-out black levels, its advanced contrast feature gives more depth to your image by adaptively adjusting the Laser output to the image, in order to create a high contrast ratio. Bright scenes appear brighter, while dark scenes remain detailed with deep blacks and shade detail.

The projector is designed to be installed anywhere. It weighs 24.3 lbs which shouldn’t be difficult to lift with both arms.

Also, you don’t require any special skills to install this projector, since it comes with detailed instructions to guide you through the process.

You can install on on any surface, on a mounting stand, flat surface or ceiling.  It has a standard VESA 75mm mounting pattern, which means you can either mount it on a tripod or a wall mount.

With Lens Shift (V ± 60%, H ± 24%) & Zoom x1.6 functionality, you can install the device virtually anywhere and set the screen to the exact size and location.

Good throw ratio with large image size (up to 300-inches)

However, this varies depending on how far away from the screen you are. The main advantage is that you can make an image appear larger from a shorter distance – image will still appear with clarity and excellent detail.

Also, if you want to stream content from a mobile device to your big screen, which includes long-distance streaming as well as low latency streaming, then the LG HU810PW is for you.

HU810PW is also AirPlay compatible. You can connect your iOS devices to stream videos, and audio, and share your screen and photos to relive the past with your family/friends. And, of course,  Bluetooth pairing is possible.

The LG HU810PW is a hub for a variety of online content. You can stream movies and TV shows from Netflix, Disney+, Prime Video, Amazon, Youtube and so much more. You can also use the projector to cast your screen while you enjoy online gaming on your device. Watching movies is made easier, as you can do it in a brighter room due to the Iris technology.

With WebOS Smart TV, you can also keep track of your favorite movies, and TV shows, and how much time you spend watching your favorite content.

Whether you prefer PlayStation, Xbox, or Nintendo, it doesn’t matter. The LG HU810PW  is compatible with next-gen gaming consoles. It has an HDMI 2.0 for 4K content and HDMI 1.4 for non-4K content. You just need an HDMI cable and you can connect your gaming console to it and enjoy the visuals. With this projector, you don’t have to worry about abandoning your current console for a new one.

Having looked at the features, does this projector have any limitations? Let’s compare the pros and cons to find out.

Here are some of our recommended alternatives if, in any case, you were dissatisfied with the limitations this projector has to offer.

For an extra $2,000 you can go for the LG HU85LA to enjoy the darker scenes. The bright scenes are brilliant and the dark scenes are realistic and detailed even in ambiently-lit room conditions. The only advantage the LG HU810PW has over the HU85LA is brightness; with 500 ANSI lumens difference only. Otherwise, the LG HU85LA is overall better with improved features; image clarity and sharpness, 4K detail, and more. As a bonus, you can talk to it as you would with a friend for more natural entertainment in the cinema.

You can also enjoy a sublime HDR experience at a far lower price, you can opt for the Sony VPL-VW325ES, which delivers a true native 4K resolution at 1,500 lumens of brightness and has comparable picture quality as the LG HU810PW for half its price. Plus, it is the least expensive Sony’s true native 4K home theater model.

The LG HU810PW is a high-end, 4K UHD projector with impressive features and great quality pixelation. Although its contrast ratio is inadequate, the bright scenes are bright and the darkest scenes are extremely dark, making the colors vibrant in your entertainment center or cinema room.