If you’re familiar with the high-end projector market, you’ve almost certainly heard of JVC. Known for offering a strong value to videophiles and casual consumers alike, JVC’s reputation is maintained with the DLA-X5900. While there aren’t any game-changing design modifications when compared to previous generation models, there are enough minute improvements to make this projector an enticing prospect for those looking at purchasing a 4k projector.

With JVC’s strong reputation for consistent and high-quality projectors in mind, let’s delve into the JVC DLA-X5900 to see if it might offer the right combination of modern features and timeless dependability for your needs. 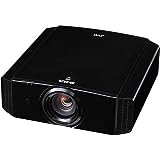 Why should anyone spend their money on the JVC DLA-X5900?

Like many projectors, the DLA-X5900 certainly has its quirks. Well documented issues such as crosstalk and questionable plug-and-play capabilities may be enough to make hardcore videophiles think twice before investing in this projector. However, it could also be argued that these imperfections are what help to make the JVC DLA-X5900 projector endearing to those considering the purchase of a new unit. At a price point that is slightly lower than other competitor’s offerings, JVC is able to deliver a strong value proposition to consumers, which helps to make the minor issues associated with the DLA-X5900 more forgivable.

Now, the DLA-X5900’s lack of true 4K resolution is a completely different issue. Both passionate videophiles and casual film fans will likely take issue with the fact that this model does not have true 4K resolution. This is more than understandable, as the ability to enjoy one’s favourite content in the highest resolution currently available to consumers is the aspiration of anyone interested in such technology. However, it is worth noting that JVC’s e-Shift system has been constantly improving since its inception some years ago.

Currently in its fourth iteration, the technology, which overlays two HD-resolution pixels over each other to produce a visual effect that is very close to true 4K quality, allows for a viewing experience that appears almost identical to actual 4K to the untrained eye. With this being said, the nature of the e-Shift system is highly technical and can be confusing for some. We suggest that those interested in learning more about the technology, and whether or not it is right for them, check out JVC’s definitive guide on the technology.

For those that are not die-hard fans of 4K video, opting for JVC’s e-Shift system may be a wise choice. When one factors in the far lower price associated with JVC’s near-4K resolution, it may be worth it to opt for this lesser video technology. This fact, combined with a sleek, attractive form factor, may be enough to convince even the most skeptical consumer that the DLA-X5900 is a solid option for those looking to combine high-resolution with a reasonable price point.

Conclusion: JVC’s DLA-X5900 is a Great Choice for Most

With an impressive combination of technical specifications, a reasonable price point, and an attractive form factor, the JVC DLA-X5900 offers more than enough to convince casual videophiles and everyday film fans to make this projector a part of their home theatre setup. However, due largely to the fact that the DLA-X5900 lacks true 4K and has a number of quirky features, this projector will likely leave much to be desired for hardcore videophiles.

This is an unfortunate conclusion to come to, as JVC has done a great job of improving upon their product offerings over the years. Known for their dependability and steady improvements, the DLA-X5900 comes close to being the best budget projector on the market available for the needs of all consumers. Yet, it is not quite enough to satisfy those who have die-hard opinions regarding video quality.

For a budget-priced projector, the JVC DLA-X5900 offers a fantastic projector for the price. In a generation or two, it is likely that JVC’s proprietary e-Shift system will be improved to the point that even the most attended eye cannot tell the difference from true 4K. Until then, this projector can only be suggested for those who do not consider themselves die-hard fans of 4K, as most consumers outside of this niche category will be extremely satisfied with the quality offered by the JVC DLA-X5900 projector.