For the past 10 years, WiMiUS has been taking the home theater world by storm. They are devoted to not only providing cost-effective projectors but also producing some of the best home theater projectors that deliver vivid and natural-like colors for your movies and games.

The WiMiUS P28 is no exception to this rule, it’s one of the most affordable and amazing long throw projectors out there, while still packing a punch with full HD resolution and 4K Ultra HD max resolution on a larger screen.

If you’re looking for an inexpensive home theater project that delivers great performance, you really can’t go wrong with the WiMiUS P28. Compared to most named projector brands, its streaming capabilities allow you to stream your favorite movies and TV shows straight from the Internet without any hassle or interruption.

WiMiUS P28 was mainly designed for cinema enthusiasts who like to throw big screen movies for everyone in their home. Its long-throw lens is designed to project huge images at a far distance (1.5-7m). In fact, it can throw images up to 300 inches screen size and with a max of 7,000 lux lumens brightness, you can get a fairly big screen picture that’s bright enough for large rooms and even outdoor use.

Let’s have a look at its features. 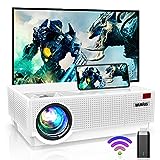 WiMiUS P28 looks like a little tank. It’s well built, with a white body and a coating of anti-fingerprints finish, which makes it very easy to clean and maintain. The top of the projector is well-designed with four buttons: menu button (which also doubles up as arrows for navigating the menu), power-on button, enter, and back button. It also features a manual keystone knob and zoom for fine image tuning adjustments.

WiMiUS P28 also comes with a remote control that will prove to be extremely handy. It features the same buttons found on the top panel of the projector but offers a few additional controls such as zooming in and out, changing picture modes and adjusting contrast, sharpness, and brightness levels. The projector is lightweight and portable, weighing just 5.5 pounds, so you can move it around as often as you need to.

There are several air vents on the sides of the projector to let out heat, which is important if you plan on throwing a huge image in your home theater room and using it over a long period of time. You don’t want to fry your projector while trying to throw a large image in your living room.

The projector has multiple inputs and connectivity options including two USB ports; Input and Output, dual HDMI inputs, an audio input, an audio output (headphone), and an IR Receiver in the front and rear.

The P28 has two HDMI ports that can be used to connect to other devices such as computers, laptops, smartphones, and tablets. WiMiUS P28 can also connect to digital TV tuners such as Hauppauge WinTV HD, AVerMedia AVerTV Volar Hybrid Q and so on which allows you to receive over-the-air broadcasts.

Likewise, the P28 can connect streaming devices such as Apple TV, Fire Stick, Roku, and others via HDMI and then watch TV using an app like YouTube TV, FuboTV, Tubi TV, or Pluto TV that lets you stream live television. You can also plug in your modern gaming consoles like XBOX, PlayStation, or Nintendo Switch vias HDMI. If you have a Blu-ray player this is also the port for you.

WiMiUS P28 projector offers up a native resolution of 1080p Full HD which lets you experience crisp, sharp image quality. Combined with its excellent display; i.e., 50-300 inches’ projection size and 1.5m to 7m projection distance, you can enjoy both full HD and 4K resolution at the full throw distance, or short distances too on a big screen. You’ll, however, notice slight pixel loss in your projected images when streaming 4K content.

These two features make the P28 an ideal projector for the casual movie lover who loves watching movies on the big screen using a high-quality image. LCD technology accounts for the projector’s high quality, sharper images that do not compromise on color accuracy and vivid details. It is also great for gaming and will satisfy your HD video requirements for watching sports and streaming videos from YouTube.

The projector also comes with an impressive luminance of up to 7,000 lux lumens and a contrast ratio of 10,000:1 for a perfect color balance; bringing you the crisp and sharp images you want. That’s pretty powerful for a projector that costs under $300. Its brightness is enough to throw a large image in a dark room.

It also features an innovative one-key brighten function feature that lets you optimize brightness, contrast, and color saturation all from one button. This feature will let you sharpen the focus of your projected image so that it looks clear and crisp to improve your viewing experience. It one of the features that make WiMiUS P28 is brighter and more vivid than most standard projectors.

Like its predecessor, WiMiUS P20, the P28 comes with a screen mirroring feature to make it easier for you to cast and watch your favorite movies and TV shows straight from the computer or mobile phone. Connect it to your device via Wi-Fi and you can stream video while in bed or while still sitting at the computer chair.

Although the screen mirroring function lets you stream your favorite movies and TV shows on the big screen, it has a few limitations. For instance, it can only mirror native Android or iOS devices. Compatibility with PC and Mac computers is not likely because of its proprietary technology.

P28 is compatible with most Wi-Fi products and with Bluetooth. You can use it to connect your smartphone or tablet with the projector. A wireless connection lets you share, with your friends, anything from your favorite photos to gorgeous home videos or even play games with it.

Ultra-fast Wi-Fi connection offers you much smoother, clearer, and lag-free online streaming from various popular streaming services. Even if you only have an old iPhone, it helps you stream the content in HD and 4K with Full-HD quality. You can also connect the projector via Bluetooth to play music on the speakers in your room.

Let’s see the quality of its audio output.

Talking about sound, WiMiUS P28 has a dual speaker system that provides 10-watts of power. This will definitely fill the room with a fuller sound. The sound quality is also well balanced and not tiny like other projectors. The speakers of this projector are loud enough to project soft and loud music in the same room without distortion.

However, we definitely recommend that you use a soundbar for the best movie-watching experience.

This projector was designed to be installed anywhere; on tables, tripod stands, or ceiling; any surface, as long as it is flat. It does not matter if you are in a studio flat, basement, or even your closet. The most important thing is that you have an image source, such as your laptop connected to the projector via HDMI cable.

If you prefer to mount the projector on a ceiling, rather than placing it on a table, chances are that you could put it at an angle against the projection surface which leads to image distortion. When this happens, you can tilt it downwards and use the vertical keystone correction to adjust distortions of the image at the top and bottom to a degree of ±50.

WiMiUS P28 costs $259.99 on the market which is quite amazing for some of its impressive features, which we’ve mentioned throughout the review. Furthermore, the P28 also comes with a 3-year warranty, which is something you don’t find in many projectors.

This means if you do encounter any faults with your projector and it isn’t up to par, you won’t have to worry about it because you will get a replacement at no cost. Plus, all issues will get professional answers within 24 hours during business days.

WiMiUS also has great customer support and their community site, especially their FAQ page, provide enough information on how to use the projector and troubleshooting tips if you are having problems using it.

Having looked at the features, does this projector have any shortcomings? First, let’s look at the pros.

User-friendly: Easy-to-use controls and buttons, in addition to its user manual, will let you know exactly how to use it.

Compact Design: It’s more compact than most home theater projectors in the same price range. This makes it very easy to carry it around without any worries of dropping or damaging it.

Very easy to set up: The projector comes with a basic setup guide for the user, and you can easily set up the image-projecting device without any problems.

With multiple input options and outputs: This makes the projector compatible with most devices. It also includes Wi-Fi connectivity that can be used to connect with mobile devices when setting up, or for connecting with other devices and watching content.

Beautiful colors: thanks to the LED light source, the colors are crisp and vivid and look better than other projectors in the same price range.

Pretty loudspeakers: While not the loudest, they are enough for small gatherings.

Longer LED lamp life: The projector uses a lamp that lasts 100,000 hours; in this way, the quality of the image will not be reduced throughout its lifetime, which means you will be able to enjoy the projector for a long time.

Extremely low brightness: With an estimated rated brightness of less than 400 ANSI lumens, the P28 model isn’t bright enough to deliver a full HDR effect; it produces noticeably washed out and dull images.

No HDR: If you want to enjoy HDR content on the big screen, this projector comes up short. While it can project 4K and HD resolutions, it can’t deliver HDR content.

Loud fans: The loud fans produced by the P28 can be distracting when you are watching a movie.

These are some of the cons the projector has, that might annoy its targeted audience. Let’s have a look at some alternatives you can choose from.

Your first alternative should be WiMiUS P20, an amazing projector that projects clear and crisp images at Full HD native resolution. It only costs $10 more than the P28 model and packs several features that make it worth considering buying; for example, it offers a longer-lasting LED lamp life, no fan noise, and has a huge keystone capability than P28.

You can also go for Yaber Y31. It’s not only more popular than P28 and cheaper, but also has an innovative + 50o4D keystone correction (vertical and horizontal) and Zoom function to ensure the projected image is always a standard rectangle. Plus, it’s easier even to adjust the image even when suspended on a ceiling.

Although WiMiUS P28 is not particularly bright, it’s an amazing and lightweight projector that you can use to watch 4K HDR videos and project high-quality content. It makes up for its lack of HDR support by producing exceptionally vivid and blur-free pictures using LCD, so you won’t need to use your glasses while watching. You can also mount it on any flat surface such as a table or ceiling in your room. The sound is also great and will let you enjoy more of your favorite content with your friends or family. To sum it up; WiMiUS P28 is an amazing addition to any home entertainment setup.