In the past few years, many projector manufacturers have been flooding the market with “low to high“ quality, affordable, and budget projectors that promise a lot but deliver little value to its user. And while it’s tempting to just ignore the problem and hope that it goes away, there are also good low-budget projectors whose brands aren’t yet known but could be a win situation for most average households. This is where WiMiUS enters.

WiMiUS is a manufacturer of affordable home theater projectors, and it’s not new to the market. Since 2011, it’s been selling projector models ranging from 5,000 lumens to 6,000 lumens. And with the P20 model, it seems like WiMiUS is finally ready to make a move over to cheaper and more accessible projectors that are still targeting home theater fans who are ready for relatively high-quality yet affordable projectors.

For example, for the same price as the P20, you can find LCD projectors that are capable of projecting images at around 2,000 lumens of brightness with native 1080p resolution. And if you want to get a brighter projector brighter than 7,200 lumens with native 1080p resolution, you’ll have to spend quite a lot more money. So, with WiMiUS P20 you get the combination of affordability and quality.

Let’s have a quick look at its features and see what makes it tick. 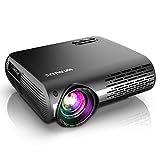 Features of the WiMiUS P20 projector

Before we begin the WiMiUS P20 review, let’s have a quick look at its main specifications. So far, we think that the most important feature of this projector is its native 1080p resolution with up to 7,200 lumens of brightness. It also comes with several other great features such as a built-in speaker, several connectivity options, and wireless screen casting capability.

7,200 Lux of brightness is high enough when it comes to home theater projectors. With this kind of brightness, you can get a pretty good image at a very large distance from the screen (WiMiUS projection distance is around 1.5 to 6m). And in my experience with this projector, I’ve found it very bright enough for small to medium rooms with light control covering over 90% of the whole area from an average size screen (50” to 200”).

The rated brightness output may be a little confusing. It is used as a marketing scheme, however, the brightness of this projector is estimated to be between 800 to 1,000 ANSI lumens. You can learn how to convert LED light source lumens to ANSI lumens here.

So, with WiMiUS P20, you’ll most likely be able to get a big image from a big distance from the screen. But how good is the image quality at such distances and across multiple light conditions?

The WiMiUS P20 has relatively excellent brightness and contrast ratio (10,000:1) specifications but what about its image quality? WiMiUS P20 is capable of producing very clean and “fairly” deep black levels together with vibrant and punchy colors. I’ve found the blacks to be dark enough to produce a great cinema viewing experience that’s free of any crosstalk issues.

With a 10000: 1 contrast ratio, the WiMiUS P20 can project crisp images and sharp colors. This high contrast ratio increases the contrast of detail and ensures clear readability, making the image brighter, sharper, and more realistic.

The brightness/contrast ratio is also great as it makes sure that you can get a very bright image at very low to medium light levels but “definitely” not in brightly-lit rooms. With a native 1080p resolution, the images look sharp and highly detailed. Plus, the projector can support 4K HD content input. Overall, the WiMiUS P20 is capable of producing excellent image quality and should be capable of satisfying most home theater fans.

Many projectors come with a screen mirroring feature to make it easier to cast and watch your phone/tablet screen on the projector. Mirroring these devices works well enabling you to display videos, photos, or business presentations.

With the WiMiUS P20, you can connect your PC/Laptop directly to the projector without any wire or action. But first, you’ll have to prepare and plug in a Wi-Fi display dongle. For those using Mac computers, you’ll need an external HDMI to Type C.

It’s only by this means you will be able to display 4K HD content on your projector. Moreover, when you use this projector as a wireless monitor to display content in 720p resolution, the projected image on a huge screen is quite bad.

It is important to note that this isn’t a smart projector and the only way you can stream your favorite movies, TV shows, or content, from video streaming applications like YouTube, Netflix, Hulu, Amazon Prime, and Disney+ is by connecting TV sticks, like Fire Stick, Roku to the HDMI port.

WiMiUS P20 comes with plenty of input connectivity options and outputs for most home theater use cases. It has two HDMI ports, USB, AV, and VGA input ports, which are enough to meet most home theater enthusiasts’ media consumption needs. Moreover, you can use the P20 as a wireless monitor using its built-in speaker and composite video output.

WiMiUS P20 is capable of outputting some very good quality images at decent resolutions. As we’ve mentioned, it has a native 1080p resolution with up to 4K content support which is great for most home theater enthusiasts. Plus, the contrast ratio is quite good (10,000:1). The colors appear vivid and quite smooth to the eyes.

Wi-Fi connectivity is one of the most useful features of a home theater projector, but most home theater enthusiasts would prefer to use their mobile phones with projector screen casting instead.

And this is what WiMiUS P20 offers as it has a Wi-Fi display dongle that lets you mirror your phone/tablet’s screen on the projector at high quality. You can also Bluetooth connect to the projector for streaming music wirelessly to your speakers in your room.

Its 4D keystone correction “allows you to get an even and rectangle picture frame regardless of the projector placement” through horizontal and vertical keystone adjustments.

So, if you are projecting at an angle from the projector, this adjustment can be very helpful to eliminate any unwanted effects. It is also worth mentioning that you can get an image with a maximum resolution of 1080p with a 16:9 ratio which is more than enough for TV watching on a small screen.

The P20 model has a 100 to 50 percent zoom function which is great for those who want to be able to change their screen size. The manual zoom is a nice feature for getting the best picture from any distance from the screen.

The WiMiUS P20 projector also has a digital zoom feature which may be one of the most important features of the projector. With this feature, you can get a closer look at objects on your screen without moving your seating position. Digital zoom works by magnifying an image, increasing its level of detail – but only up to a point, after which it results in pixelation and poor image quality.

The P20 has two built-in speakers that produce an output of 10W each. It is definitely not going to fill up a large room with good quality sound, but it can handle the basic speaker needs for a small party.

The speakers are loud enough to fill up a small room with sound and should be better than TV speakers. But they do not have any deep bass which means you cannot use them if you want to enjoy music with your friends or family members in the living room or backyard. To solve this problem, you can connect dedicated external speakers such as BOSE SoundTouch 300, which uses Bluetooth connectivity to connect wirelessly to the WiMiUS P20 Projector.

WiMiUS P20 is an affordable projector going for $269 in the market which is quite amazing for some of its impressive features, which we’ve mentioned throughout the review.

Furthermore, the P20 also comes with a 3-year warranty, which is something you don’t find in many projectors. This means if you do encounter any faults with your projector and it isn’t up to par, you won’t have to worry about it because you will get a replacement at no cost. Plus, all issues will get professional answers within 24 hours during business days.

And in case you want to buy the projector, you should go to their official website where they provide discount offers and deals.

Having looked at the features, does this projector have any shortcomings? First, let’s look at the pros.

Very easy to set up: the projector comes with a basic setup guide for the user, and you can easily set up the image-projecting device without any problems.

With multiple input options and outputs: this makes the projector compatible with most devices. It also includes Wi-Fi connectivity that can be used to connect with mobile devices when setting up, or for connecting with other devices and watching content.

Longer LED lamp life: the projector uses a lamp that lasts 150,000 hours; in this way, the quality of the image will not be reduced throughout its lifetime, which means you will be able to enjoy the projector for a long time.

Small and lightweight: The WiMiUS P20 is super light and small, weighing 3.75kgs, which is great for travel or moving from one room to another.

Digital zoom: this feature allows you to get a closer look at objects on your screen without moving your seating position.

Dolby Digital supported: With this feature, you can enjoy watching your favorite movies in full HD quality, including the latest blockbusters.

Poor image quality: the projector’s images are not as sharp, clear, or vivid as those from similar models. The projector struggles with darker images and blacks tend to look grey. Blacks also appear washed out with less detail than you would expect on an HD projector.

Lack of lens shift capability: there aren’t many projectors that offer the lens shift feature, which can be useful if you want to place the projector on the ceiling or wall.

No 3D functionality: the projector doesn’t support 3D content, which is a bad thing because some users prefer to watch movies in 3D.

These are some of the cons the projector has, that might annoy its targeted audience. Let’s have a look at some alternatives you can choose from.

A P20 alternative to consider is the WiMiUS P28. The P28 model is packed with many features, including a long-lasting LED lamp, more accurate colors and contrast ratio (5,000:1), and more advanced keystone correction technology. Besides, the P28 is also brighter than the P20 model (9,000 lux lumens) which is great for better images in ambient light.

Optoma UHD38 – this is one of the most affordable UHD projectors improving on every feature provided in WiMiUS P20. Its price is almost thrice the price of P20, but it’s worth it. We recommend this projector mostly to gamers mainly because the P20 is designed for cinema enthusiasts. The projector boasts the lowest input lag (4.2ms) and an impressive 240Hz refresh rate all of which are perfect for fast-paced or competitive online gaming. Plus, it’s very bright (4,000ANSI lumens).

The WiMiUS P20 is an amazing projector that delivers 1080p image quality at a very affordable price. It has several features that make it worth considering buying as it offers long-lasting LED lamp life and huge keystone adjustability. Although the WiMiUS P20 is not well known, it is one of the best budget-friendly native Full HD projectors on the market that can give you more than enough reasons to consider buying it. If you love movies, then the WiMiUS P20 is a good option because it offers a fairly immersive viewing experience.