A projector’s biggest rival is time. At some point, another manufacturer will outdo what has already been done. Some projectors are hot in the market when they are released, but cool down over time as other manufacturers get an opportunity to catch up and even provide better features for newer projectors. This is not to say that those projectors are poor, they have just been outdone at the given price range. This goes around for almost all technological devices, advancements are being made each day.

This is the case with ViewSonic PX727HD, a 1080p DLP projector for your home theater. It is a versatile projector, well-equipped to deliver cinematic colors while offering a relatively low input lag for gaming. The rest of the features for this projector are pretty standard, but also very helpful. If you’re looking for a projector for your home theater below $1000, this is an option to consider. There are questions on whether this projector has been outdone by time. Let’s look into the features and find out. 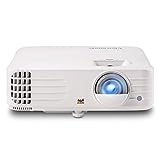 A “Chin Spoiler” to minimize leaking of light at the bottom

For most projectors, light spills out of the lamp to the top, bottom, and sides of your screen. The bottom spill is particularly annoying and can be distracting since it lights up the wall below your screen. While other projectors have a lens shift (not all of them), the PX727HD has a small lip in front of the lens, what we refer to as a “chin spoiler”.

When the image is produced, the chin spoiler blocks light coming out of your lens below the image. There will still be spills at the top and sides, but this is a nice feature to have for your projector.

The PX727HD allows you to enjoy a stunning high-definition resolution. At 1080p native resolution, it can support a wide variety of both HD and non-HD content including 1080p, 1080i, and 720p. This projector produces a high quality of image, boasting over 2 million pixels.

This is suitable for watching movies, sports, TV shows, and more without the image being distorted as the screen size scales up. Being a DLP projector, it ensures a good image quality without any filters being applied.

It offers a variety of options in installing the projector, without moving it in some cases. You can mount it on the ceiling or place it on a surface. It is common for you to want to move your projector from time to time; it could be for cleaning or just changing your gaming station. It is normal for projectors to generate a distorted image when placed at an angle to the projection surface. To counter this, the PX727HD has a variety of image correction features.

This projector also has the Corner Adjustment feature to generate a perfectly squared image at the corners. Just like most current projectors, the PX727HD is compact and lightweight. It weighs about 8.6 pounds. You can easily lift it with both hands. Moving it around shouldn’t be a problem.

ViewSonic PX727HD has ISF-certified color calibration tools. ISF certification indicates that a projector will maintain a consistent RGB color balance. This means that the color has been calibrated for a true cinema experience irrespective of the time of the day/night.

It also fulfills 100% Rec.709 color gamut standard denoting it has a very wide color range. It is, therefore, able to accurately display a wide range of colors. It has a 6 segment color wheel (RGBRGB) to support this.

The lamp is not too bright per se, it is bright enough to support a home cinema and gaming in a darkened room. In a brightly lit room, there will likely be some washout especially in the black areas of the image. This is inherently a good thing as it gives the projector an optimum color performance. There is no green bias associated with bright projectors.

This is a feature that was added specifically for gamers. If you’re a competitive gamer, you know that responsiveness is critical for a wonderful gaming experience. You would prefer that your character, say in Fortnite or Cyberpunk, responds immediately you press your controller. This is only possible if your projector has a low input lag.

This low input lag will ensure your games respond as fast as possible when you press your controller. The input lag is virtually invisible in real time, but when you put in on the super slow motion, you might notice a minimum lag in response time.

The PX727HD is a long throw projector. It has a throw ratio of 1.13-1.47. This means that you will need over 10 (10.7ft to be precise) feet to project a 100-inch image. However, the available image size is very large, ranging from 30” – 300”. This will allow you to use it in a large room with the furthest person seeing a clear image. The recommended size for 1080p projectors is usually 100-120”. Beyond this, the available pixels are not sufficient to provide a high-quality image.

Just like other bulbs, projector lamps have a predicted operating time. Unlike common bulbs, which essentially go out after this period, projector lamps will start to dim. Most lamps do not make it past 15,000 hours, but ViewSonic PX727HD’s lamp can last up to 20,000 hours (that’s over 2 years!). This is one of its unique attributes.

We must mention that this is only possible when the projector is in Eco mode, but if you’re using the normal mode, it will only last 4,000 hours; which is typical for most projectors. You can always switch between different modes depending on the light in the room and you can always take other measures to extend this lamp’s life. Start by letting it cool down, without moving it, after each time you use it.

For gaming, audio is equally as important as visuals. This doesn’t just mean loud; the sound should be clear and of high quality. In Viewsonic, PX727HD is an inbuilt 10-watt speaker that is powerful enough to provide quality audio for your games. The speaker is not just noisy; it provides good quality sound. However, if you intend to use it in a much larger room than a typical living room, you might need to connect some external speakers. It has an audio input/output port through which you can connect your home theater system.

There is only a handful of 3D movies produced globally; Avatar, The Hobbit, and Prometheus just to name a few. This projector allows you to enjoy the 3D experience when you have a 3D movie. It has a 3D Blu-ray HDMI port for connecting and displaying 3D content. Of course, you’ll need 3D glasses for viewing. Watching a 3D movie is an out-of-this-world experience as you will be viewing life-like images very close to your face.

PlayStation, and Xbox. Therefore, you don’t have to worry about purchasing another console. HDMI support in this projector permits you to connect it to other devices such as laptops or desktops via an HDMI cable. Compatibility with the next generation of gaming consoles like the Xbox X series remains to be determined.

The PX727HD retails at about $750-800 depending on the supplier. With the current projectors in the market, we would say that this projector is quite aggressively priced. The features it has would have justified the price a while back, but it doesn’t work with the current market.

On the other hand, the warranty is really good. ViewSonic offers a 3-year limited warranty on parts and labor, a 1-year limited warranty on the lamp, and a 1st-year free Express Exchange® service. This is one of the industry-leading warranties allowing you to purchase the product without worries, knowing that there is ample time for customer service provided the projector malfunctions.

Having looked at the features, let’s analyze the pros and cons of this projector to see if you really should purchase it.

This is a feature only available to ViewSonic projectors, other brands such as BenQ or Epson do not have it. It is not a necessity but a nice-to-have feature. It is quite useful since this projector does not have a lens shift.

When most projectors do not last past 15000hrs in the Economic mode, the PX727HD can last up to 20,000hrs in this mode. This is a ground-breaking feature that shields you from the cost of replacing the lamp frequently.

Whether you need it for your home cinema or gaming, it doesn’t matter. It can comfortably fulfill both purposes. It has a low input lag which is important for competitive gaming while delivering cinematic colors for watching movies, TV shows, and sports.

Over 40% dim in light output

It is common for projectors not to deliver the amount of ANSI lumens claimed by the manufacturer, but by over 40%? No, this is not common. ViewSonic claims that the PX727HD delivers 2000 ANSI lumens. On testing, it only delivers 900 ANSI lumens. If you’re under the impression that you have bought a bright projector, you will be greatly disappointed.

We have seen that ViewSonic PX727HD has some unpleasant cons, are there other alternatives to consider within the same price range?

If you have been unsatisfied by what ViewSonic PX727HD has to offer, here are some alternatives:

The PX703HD offers virtually everything that the PX727HD has, except the horizontal keystone correction. In addition, it is brighter, emitting 3500 ANSI lumens, and has a lens shift. All of this is offered at $650, $100 cheaper, so it would make a lot of sense to go for the PX703HD instead of the PX727HD.

The PX706HD has the same price as the PX727HD. Its lamp is brighter emitting 3000 ANSI lumens. It also has a very high dynamic contrast ratio. It is a short-throw projector allowing you to project a large image size at a short distance from the projection screen.

ViewSonic PX727HD is a versatile projector, but very limited. It can be used for multiple purposes but it is a master of none. This is a huge problem because its competitors offer the same features and so much more, at the same and even lower price ranges. But if you’re looking for a versatile entry-level projector, this is the one for you, otherwise, you can get a better one for your money’s worth.