When you’re in the market for a new projector for your home there are some key features that you should always consider. One of the most overlooked features is the throw ratio. You would want to have a projector that displays a large image size without being too far from the projection screen or wall. You should also consider the purpose; whether you need it for gaming or for your home cinema.

A projector purposed for gaming will not necessarily offer an optimum visual experience for movies, and vice versa. It is quite difficult to get a projector that strikes a good balance between gaming and movie visuals while still offering a great throw ratio. Well, not anymore.

The BenQ HT2150ST is a DLP short throw projector optimized for gaming. When it was released back in 2017, the HT2150ST was the world’s first projector with a 16ms input lag. It is also designed to deliver cinematic colors for a delightful home cinema experience. The biggest strength of this projector is that it uniquely strikes a balance between gaming and movies such that both groups can use it. So, what are these features that enable it to support both groups? Let’s have a closer look. 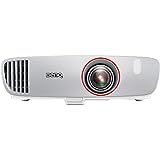 The image size can go up to 300” which you can project just from 16.5 feet away. For image clarity purposes we recommend that you don’t go past 120”, beyond this you go past the native resolution capabilities. It also has a 1.2x zoom that allows you to enlarge images without moving the projector. This sometimes reduces the clarity of the image.

It has a 1920 x 1080p full HD resolution to deliver high definition images. With lower image sizes it is common not to notice the difference between this resolution and 720p resolution. As images get larger (>70”) you will notice a difference in clarity. This is because 1080p resolution has over 2 million pixels to deliver an incredibly clear image (as opposed to 720p which has only 900, 000 pixels). With HT2150ST, you’re guaranteed a clear image.

As we had said earlier, this was the world’s first projector to deliver an input lag of 16ms back in 2017. At that time it was so low that it was considered no input lag for the individuals that initially used it. This low input lag is useful for fast-paced games such as Fortnite, FIFA, Injustice, Mortal Kombat, etc. It ensures that images on the screen respond immediately you press your controller. It has 2 HDMI ports specifically for connecting your consoles and a VGA port if you’re a PC gamer.

If you’re a competitive gamer, this feature is crucial for you because it maximizes your chances of winning and enriches your gaming experience. This gives you a competitive advantage over an opponent who is using a projector that has a high input lag (>50ms). It is important to note that low input lag is limited to the Game picture mode, which we will discuss later.

BenQ HT2150ST was designed to be used in different conditions. It has multiple color modes optimized to provide the best picture quality under the set conditions. These modes are 3D, Bright, Cinema, Game, Game Bright, ISF Day, ISF Night, User, and Vivid.

By default, the picture mode is set to Game mode. In this mode, the picture prioritizes clarity, cleanness, and sharpness. It also delivers a Cool color temperature and sufficient black levels – even in the presence of ambient light. The color temperature is adjustable depending on the surrounding light. In a darker room, you have an option to give the picture more snap by changing the color temperature to normal. The preset modes are good enough for gaming without needing further adjustments. It also has a high contrast ratio of 15000:1 that makes images more distinct.

The Cinema mode is designated for darker rooms with the color temperature set to Normal. In this mode, the picture is so well-balanced naturally, making it suitable for your home cinema. This, of course, comes with a darkening of the lamp by about 32% and an increase in input lag to about 49ms. The HT2150ST is laced with the 96% Rec. 709 Cinematic Color technology to deliver the best-in-class cinematic colors for your home cinema. It also has a 6 segment RGBRGB color wheel to support the delivery of cinematic colors.

We must mention that the Game Bright and Bright modes are not visually appealing so we recommend that you avoid them. The former compromises the black levels, while the color of the latter shift towards green – as it is with most bright projectors.

One of its most admirable features is that you can select the color of the wall you intend to project an image on, and the projector will adjust color settings to deliver the best possible picture on that wall. This includes adjusting the brightness, color saturation, temperature, etc.

It is very rare to get a projector that delivers cinematic colors for a home cinema as well as a low input lag for gaming. This proves just how versatile the HT2150ST is.

With a projector, it is very rare to have a fixed gaming station. You would want to even move it to a friend’s place and connect a gaming console to play (Xbox, PlayStation, etc.). The HT2150ST is compact and lightweight, allowing you to do this with ease. It weighs about 7.9lb, and you can lift it with a single hand or both if you want to be safe.

When you move your projector around a lot, chances are that you install it at an angle from the projection surface. This leads to image distortion (generating a trapezoid image), at the top and bottom and sometimes at the sides. This projector has a vertical keystone correction of ±40% that enables you to adjust distortion at the top and bottom without moving the projector around. However, you will have to align the image manually because this projector lacks a lens shift.

A bright lamp emitting up to 2200 ANSI lumens

The HT2150 has a bright lamp that emits 2200 ANSI lumens. This is important because you won’t be limited to using it at night or in a darkened room. During the day, when there is ambient light in the room, it ensures that washout is minimized. Lamp brightness differs depending on the picture mode selected.

The highest light output is in the Bright mode, while the game mode has the least. For all of these modes except the Bright mode, the lamp emits less than 1000 ANSI lumens in the Eco mode. You get the freedom to select a picture mode depending on the surrounding light to minimize washout.

Compared to most projectors within and even above this price range, the HT2150ST has a very good audio setup. It has two 10-watt stereo speakers capable of providing audio for your games and movies, provided there is no loud surrounding sound. There is no need to invest in an external sound system, it is capable of supporting your audio requirements. Although the audio is loud enough, the quality of the sound coming out of the speakers is low. Suppose this audio is not enough for you, there is an audio output port for connecting your external sound system.

When you power up the HT2150ST, you will be surprised at how silent the projector is. This is because it has been designed to release low fan noise at 27dB in Eco mode and 29dB in the Normal mode. Fan noise increases in High Altitude mode (5000 feet) but it is still relatively low compared to other models within the same price range.

BenQ HT2150ST retails at around $900. The pricing justifies the features; it has some features over projectors higher than this price range. It ushered in the golden age of low input lag projectors and for that alone, the price is justified.

One of the best things about BenQ projectors is their outstanding warranty. The HT2150ST is no exception, having a limited warranty of 3 years. It is important to note that projector lamps, refurbished products, mounts, and all other accessories are excluded from this warranty. This long period warranty will allow you to comfortably purchase the product knowing there is ample time for customer service provided the projector malfunctions.

Having looked at the features, does this projector have any limitations? Let’s compare the pros and cons to find out.

This projector is very versatile

Despite the projector being marketed primarily toward gamers, it is versatile enough to support the needs of a home cinema. It was built to take gaming to the big screen. It has a low input lag, a fast response time, a large screen size, and a picture mode optimized for gaming. At the same time, it is equipped with cinematic color technology to deliver cinematic colors for a home theater experience.

The audio is better than close competitors

Projectors are not known for their sound quality. With this established, the HT2150ST performs quite well by these standards. Most projectors within this price range usually have a 5-watt mono speaker that is only useful in a small room. This projector on the other hand has 2 10-watt speakers to deliver sound that is loud enough. The quality is okay but much better than its competitors.

The most recent projectors come with this feature, which allows you to align the image by moving the lens without moving the projector. This feature is important considering 3LCD projectors are not as portable as DLP projectors; meaning they are more susceptible to mechanical damage if you move them around too much. The HT2150ST does not have this feature.

A deficit in brightness after tests

The manufacturer states that HT2150ST’s lamp is capable of emitting 2200 ANSI lumens. Upon multiple tests, sources have revealed that the light output is 25% less than the value indicated by the manufacturer. This could be a disadvantage if you were opting for a much brighter projector. We must mention that the brightness is sufficient.

If these cons have been off-putting for you, here are some alternatives to consider.

If you’re not satisfied with what BenQ HT2150ST has to offer, here are some alternatives to consider:

BenQ HT2050A is almost identical to the HT2150ST but it costs $50 less. However, offers lower audio having two 5-watt speakers and it also has a longer projection distance.

BenQ TH671ST on the other hand is brighter than HT2150ST but offers a lower contrast ratio. The lamp life is almost double that of HT2150ST. However, it does not support 3D content. It would be the perfect replacement for the HT2150ST since it has nearly the same features but costs $100 less.

If you’re a competitive gamer BenQ HT2150ST would be a wonderful addition to your gaming station. Even if you just want to relax with a movie or sports, this works too. This projector is versatile to fit both purposes. Its limitations are minor and the competitors don’t have an edge over it. But if you’re convinced that this is not the projector for you, then you should consider BenQ TH671ST. It is a desirable alternative but not necessarily better.

Next Post: BenQ MH733 Review: Budget Projector for your Presentations